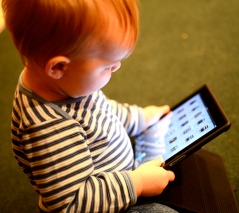 The other day, I read an article about toddlers using iPads. According to the article, many believe that using apps on the iPad will help children learn.

The writer, Ben Worthen, confirmed that his son’s knowledge of words improved when he started using an iPad regularly. But he was also concerned as he began to notice that his son would zone out when using the iPad. It also became harder for him to put it down at bedtime. So he finally decided to stop giving it to him.

There is not enough research yet to know what kind of impact using an iPad has on children. We try to avoid too much TV and video games because of behavioral consequences later on. But we just do not know yet whether using an iPad is detrimental or not.

I have to confess that I have given Livi my old iPhone during especially challenging diaper changes. She does not use any apps but simply tries to turn it on. We also use my husband’s iPad to keep her occupied when I trim her finger nails because otherwise it would be impossible to do.

So I guess I use it for emergencies only. But still, I do expose her to it and she has been asking for it more often lately.

If it were up to my husband, we would use the iPad to teach her about animals and letters and music. But so far I am still reluctant and feel it is better to interact with her directly rather than through an app.

But what if we were to use the iPad instead of a chalkboard and would still do all the teaching ourselves? Would that make a difference? Or are we doomed regardless because we are after all still using a screen.

What do you think? Do you let your toddler use an iPad? Have you noticed any change in behavior? Does your kid use an iPad on a regular basis, only during “emergencies,” or never? If you have an iPad or even a smartphone in the house, does your kid ask for it? How do you handle it? If a toddler is still too young, what age is old enough?

29 comments on “Toddlers And iPads: Do Or Do Not”